The WOW Zone in Wythenshawe is holding an exhibition to commemorate World War One through the eyes of Wilfred Owen’s poetry.  This will take place at Woodhouse Park Lifestyle Centre at 4.30pm on Monday, 4th August, 100 years to the day since the start of the war.  Everyone is welcome!

This project has been funded by the Heritage Lottery Fund and Archives+ in Manchester and has been led by 15 Young People from the Wow Zone who have compared Wilfred Owen’s poetry with archive material and documented evidence to see if his view of life in the trenches accurately reflects the realities of trench warfare.

Based at Woodhouse Park Lifestyle Centre in Wythenshawe, the WOW Zone is part of Wythenshawe Community Housing Group’s community investment programme, providing high quality community services to the people of Wythenshawe.  The WOW Zone Team provides innovative learning programmes which are accessed by over 400 children and Young People every year.

This ‘WW1 Then and Now’ project was initially prompted last summer by a suggestion by Wythenshawe’s late MP, Paul Goggins, who thought it would be great to reflect on this year’s WW1 centenary.

Andy Jordan, Manager of the WOW Zone, explains; “Our Young People came up with the idea of looking at Wilfred Owen’s powerful poetry that tells the stark reality of life in the trenches.  There is a strong local connection as Wilfred Owen was commissioned into the Manchester Regiment. As the project evolved, we discovered that Young People were not only fascinated by the events of 100 years ago but they could express their thoughts in powerful, creative ways. They have shown great enthusiasm for this project and have used their research to create drama, write poetry and produce animated films – some of which will be on display in the exhibition”.

The Young People did a lot of research to gather their evidence.  They visited local WW1 graves, the Imperial War Museum, the newly refurbished Manchester Central Library to examine the archives, The Lowry Theatre to see War Horse and even the National Football Museum to discover how important women’s football became during the war. Highlights of the project included a Q & A session with a local ‘older people’s’ group to get a perspective on war, a poetry workshop led by a theatre company and a visit by an army corporal who told the story of the war from the perspective of Private Tommy Atkins.

Emily, aged 15 said; “I thought the project helped me to understand more about the war. I liked that we didn’t just look everything up on the internet –  I was able to see the equipment they had, look in the archives and speak to people who could tell us what war was actually like. I thought it was really interesting”.

Nigel Wilson, Group Chief Executive of Wythenshawe Community Housing Group said; “WCHG is committed to community investment and this exhibition is a great testament to the work that the WOW Zone team can do with local Young People. It has also been a great way for different generations to work together and develop a greater understand and respect of each other.”

Explaining the importance of the HLF support, Sara Hilton, Head of the Heritage Lottery Fund North West, said: “The impact of the First World War was far reaching, touching and shaping every corner of the UK and beyond. We have already invested more than £45 million in commemorative projects, including local community projects like WOW Zone, which will enable young people to explore and record their local wartime history”.

Following the community showcase event on 4th August, the Exhibition will be on display at Manchester Central Library and will then go on tour across local community centres and be delivered as an Assembly Presentation to the 4 local high schools. 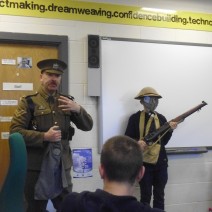