The app is the final element of the year-long Heritage Lottery Funded project run by the ‘WOW Zone’ at the Woodhouse Park Lifestyle Centre, which allows young people to celebrate and explore how and why people have chosen to journey to and settle in Wythenshawe over the years.

Developed in partnership by Manchester Metropolitan University (MMU) the app, which is available for all Android devices, allows users to explore the diversity of the Wythenshawe community using Augmented Reality (AR). The app interacts with objects in the real world to trigger an interactive digital experience.  Users can explore interviews with local people, stories of journeys from other countries to Wythenshawe, world food recipes and much more.

The app has been developed by MMU, using content and design ideas gathered by young people throughout the project and spotlights Poland, Greece, Nigeria, Malaysia, Iran and India. These countries represent the diversity of the young people who have engaged with the project, as well as the local people in Wythenshawe.

The project also hosted a ‘World Food Event’ at the Woodhouse Park Lifestyle Centre, produced a two month exhibition at the People’s History Museum in Manchester and has met every Wednesday to learn about the diversity of Wythenshawe.

WCHG Interim Chief Executive Kevin Lowry said, “Roads to Wythenshawe is a fantastic project and all the young people involved have worked really hard to create this app, which uncovers some really interesting stories about peoples journeys to Wythenshawe.  Well done to everyone involved.”

The Lord Mayor of Manchester Councillor June Hitchen, said: “People from around the globe choose to visit and settle in Manchester, a city that welcomes and celebrates diversity. The Roads to Wythenshawe app helps share their stories and shines a digital spotlight on the magnificent contribution residents with international connections make to our great city and our communities.” 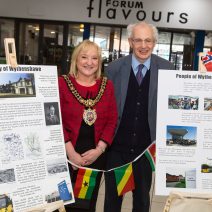